Slowly, I’ve been working on a digital project that employs network visualization to explore social, ideological, and textual connections between early ecologists and late Victorian and modernist writers. I gather data about these figures and their interactions from secondary and primary sources, tag, sort, and categorize them, before ultimately exploring the links between them by visually representing the network using the software Gephi. By establishing a way of tracking historical interactions between figures, I’ve taken initial steps into what I hope will be an increasingly large and rich network visualization.

Below I’ve jotted down some thoughts about the process and my initial findings (and also some ideas about where I might go next). You won’t find much discussion of method and very little, I hope, specialized knowledge. Folks who are actual experts when it comes to this stuff would likely find this account heavy on process and light on rigor, and I’ll admit that’s fair. I’m not using this project to make grand claims about literary history or form — just to see things I might not otherwise see, so that I can follow threads that would might remain too tightly interwoven to pick out.

What I’ve found is that using Gephi to display the network has provided new, and just plain fascinating, ways of understanding the links between figures, and has offered to me new avenues for research in the form of new authors, movements, and social groups to research more closely.

The need for this project emerged from my dissertation research, and the reading I’ve done in the history of science as it relates to three distinct subjects:

The connection between these movements was evident to me, but somewhat hard to put my finger on, so I thought it would be helpful to start externalizing it so that I could see and remember as much as I could.

Here’s an example of the sort of connection I wanted to contextualize and find out more about.

Once I get to C.K. Ogden, then I have more connections to a host of literary and philosophical luminaries who are important to my larger field of modernist studies and my own work specifically. Just a small selection:

My approach for working my way through this was to see if I could find more connections like these by logging names and interactions. I started by mining 4 secondary works, chosen to create a range of figures and connections.

A walk through these books generated a spreadsheet with 309 figures in it, which I sorted into four types.

There are also figures who need to be thought of as “hybrids.” For example:

The category of “Reformer” is a key one for me, and I hypothesized early on that it would be key in my efforts to link scientific and literary figures. That turned out to be the case, and as a result I’ve been researching reform movements more carefully than I otherwise would have.

With these 309 figures, I tracked 686 directed engagements (i.e. the “connection” flows from A to B, not both ways),1 and then weighted them. The ability to add “weight” to connections (or “edges” as they’re called in Gephi and in network visualization more generally) was key for me and made a big difference when it came time to play with visualization options to trace connections. Here’s how I assigned weight, again with examples:

I spent a lot of time figuring out how many numbers I wanted on this scale, and what eventually guided my decision was a sense that these three categories fit rather intuitively into the way literary scholars place figures and authors in context or connect them to their contemporaries.

I didn’t do anything very fancy in Gephi to make the visualizations below.2 But after some research and consultation with others about settings, I got something like this:

Some more slides and notes about colors as a way of explanation.

So far H.G. Wells is the only figure who is a combo of all four categories. He’s purple, and he’s right in the middle of everything. More about that in a second. 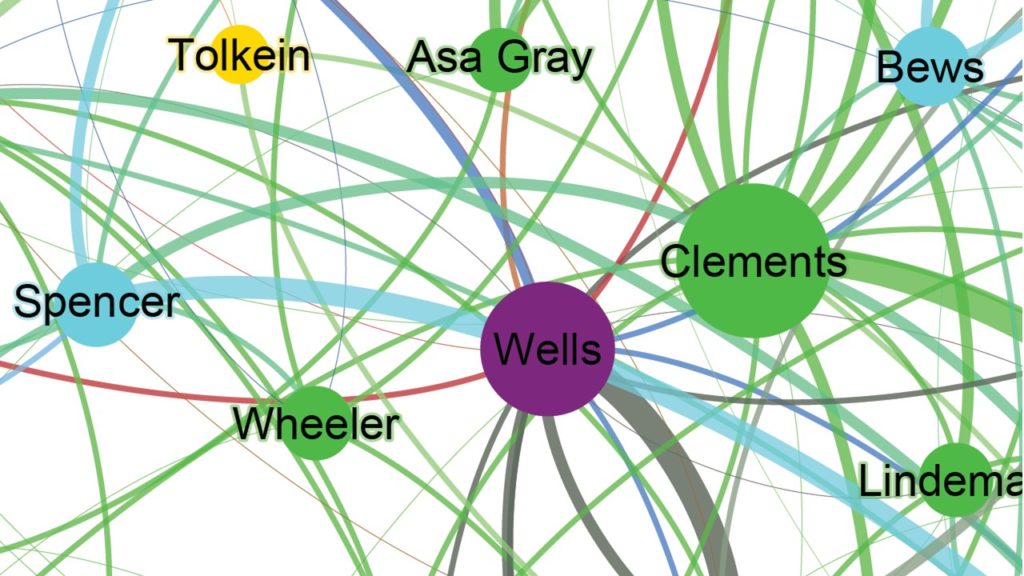 A few thoughts about what I’ve found so far.

First, the network held few surprises in terms of who its central figures were. Haeckel and Darwin are close to the center. 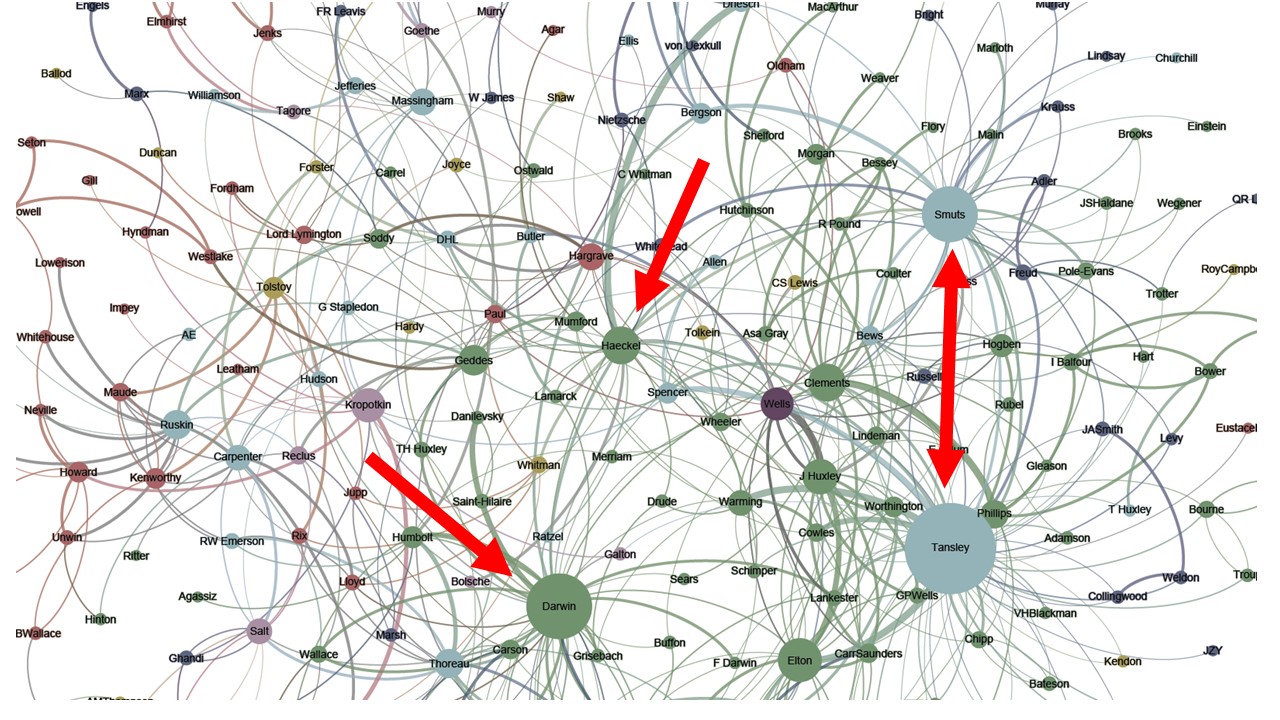 And there’s a nice cluster of scientists on the right that registers the foundations of ecosystem ecology in the debate between Tansley and Smuts. 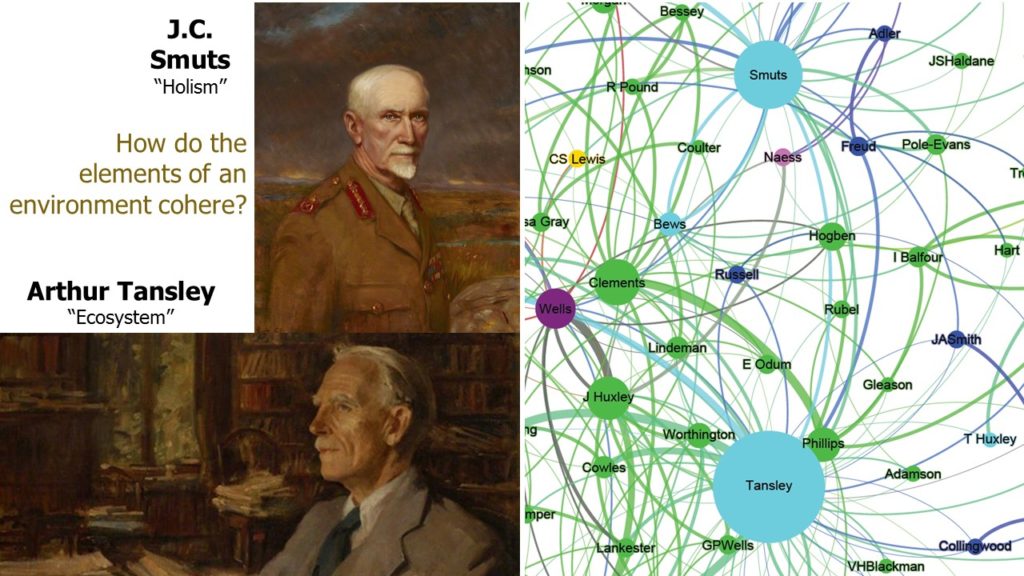 The Reformers (in red) cluster together on the left: 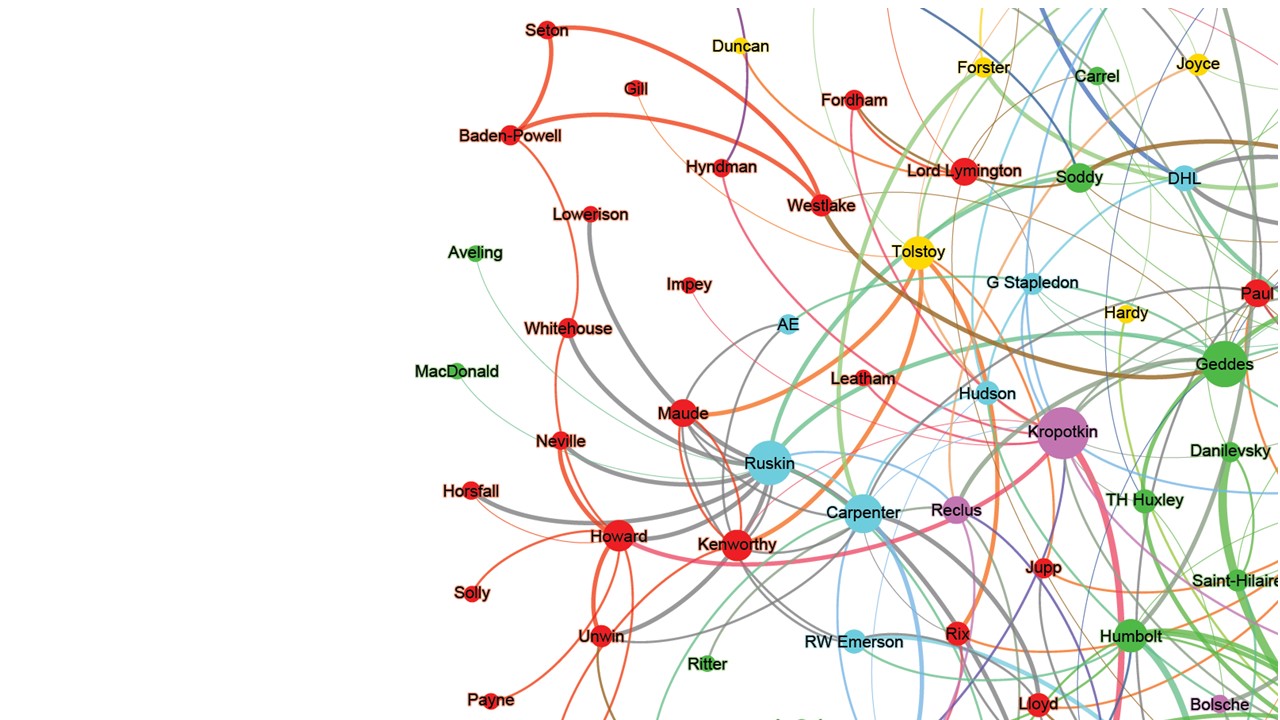 And there’s a cluster of “Thinkers” (mostly philosophers, in dark blue) towards the top: 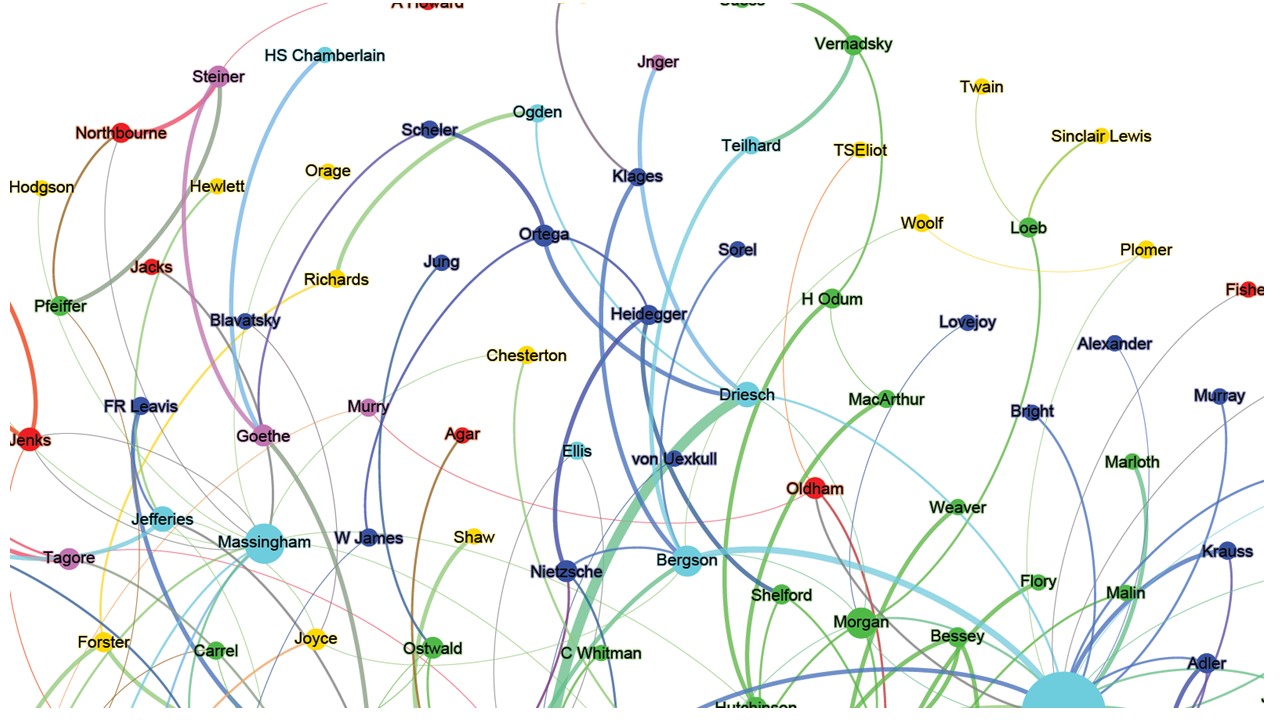 There are three key things these visuals taught me.

1. Pay attention to figures between center and outskirts. They’re often key translators of ideas between groups. For example, Peter Kropotkin. His Mutual Aid theory of evolution was popular at the time and largely forgotten now. (That said, here’s a great piece on it by David Graeber.) 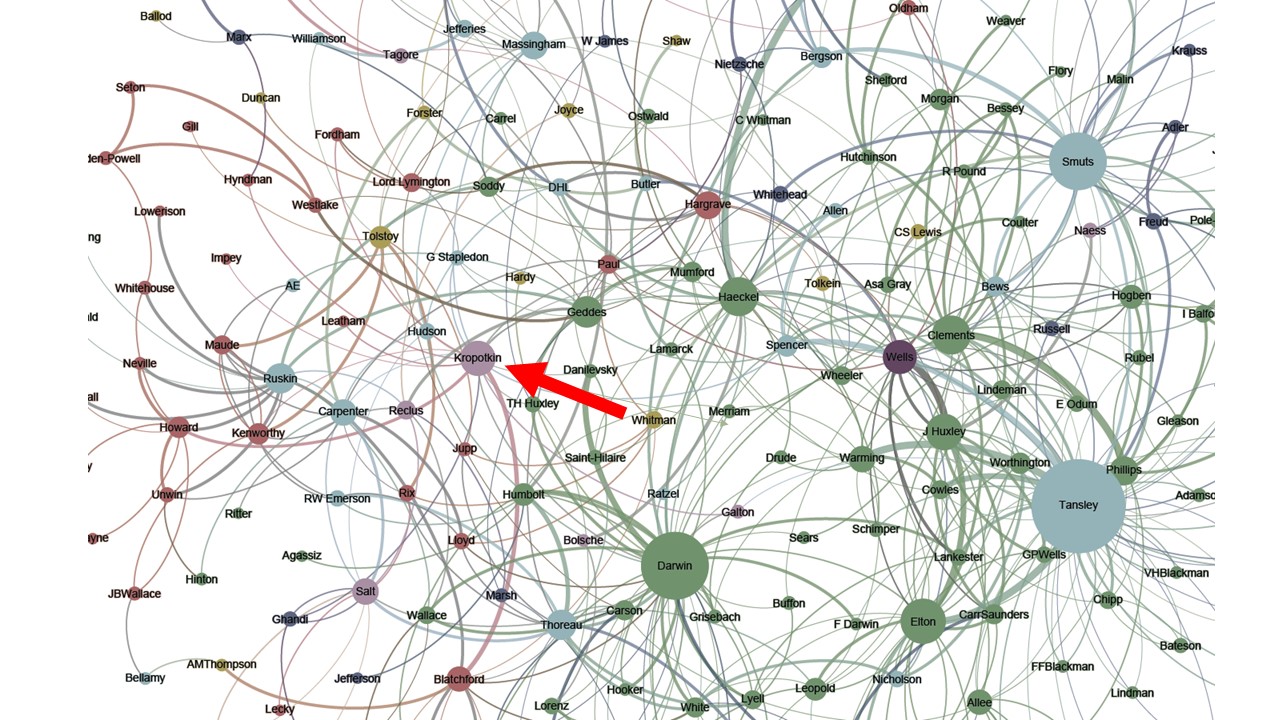 2. Follow the line close to relationships I’m interested in and see what else is in the vicinity. For instance, I’ve written about E.M. Forster and Edward Carpenter, so I can look there to see who else is close by. Tolstoy! Interesting. 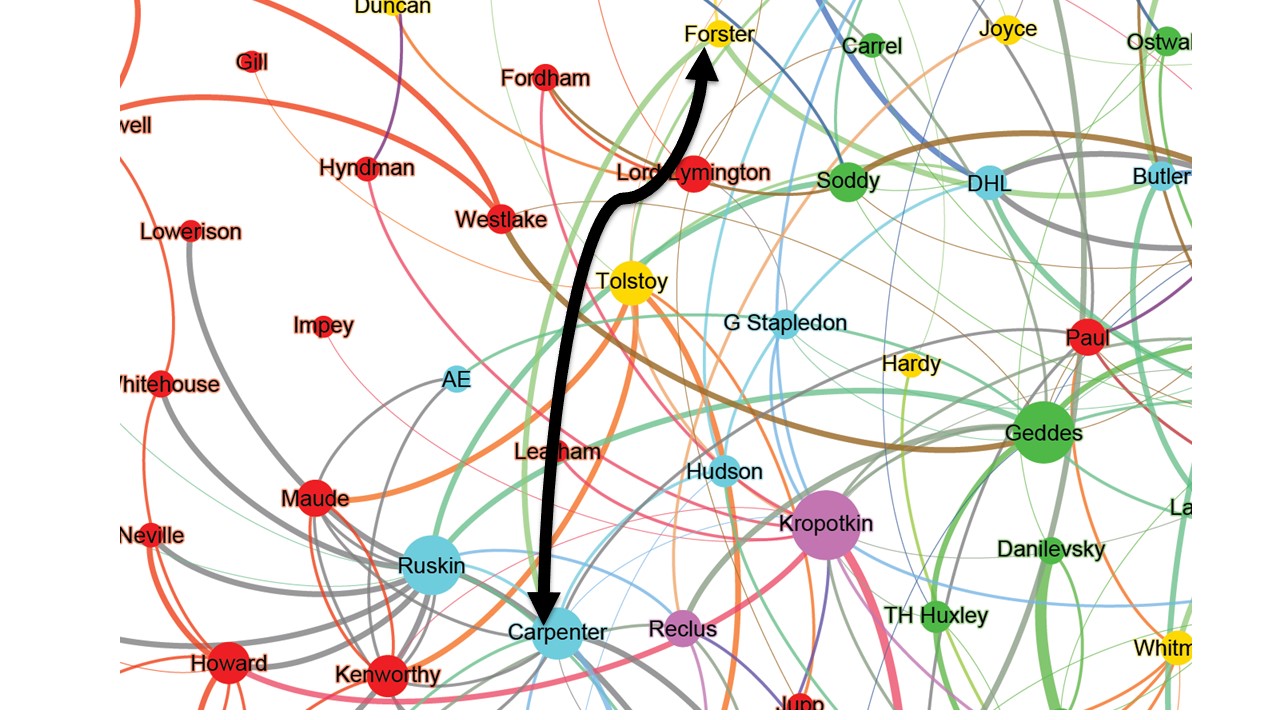 3. Note how plugged in H.G. Wells is: right in the thickest part of the network, even thought I haven’t purposefully purposefully tried to link him in. I’m writing about Wells, so this is encouraging and offers some directions in which to go. 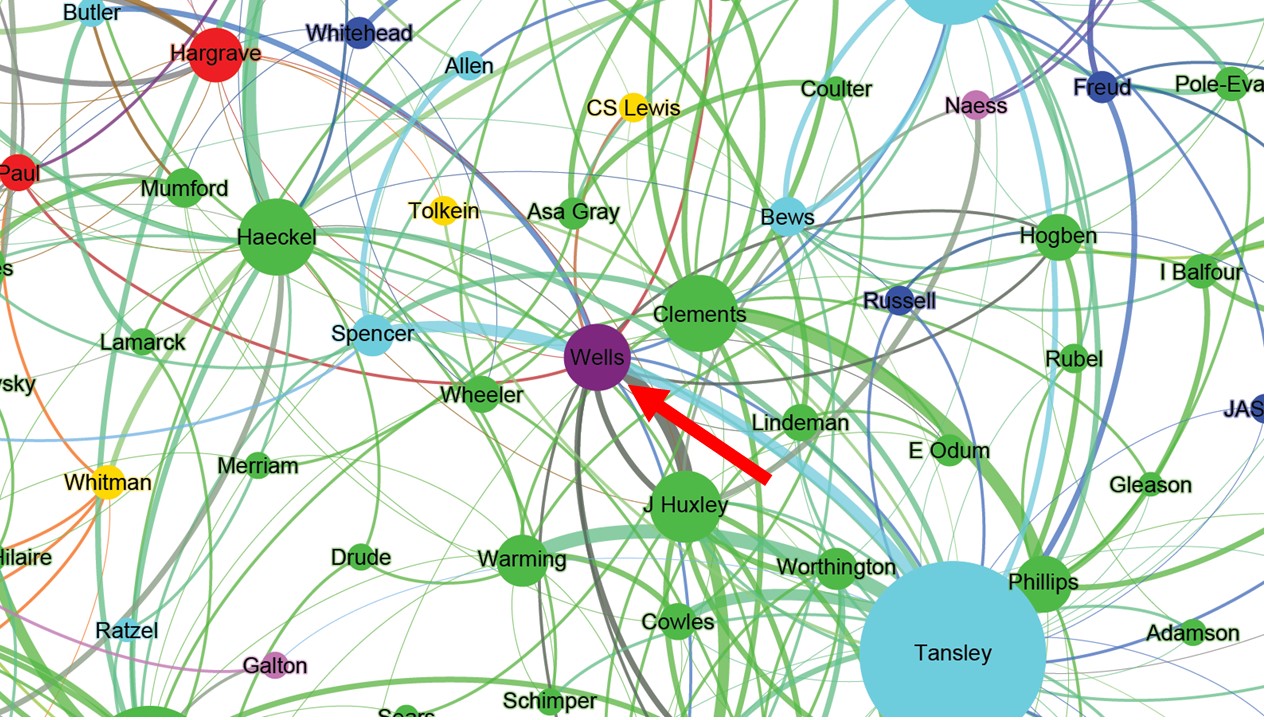 All of that helped, and the graphs look nice. Where do I go from here?

First, I keep adding figures to the spreadsheet I created. If I’m reading and notice a connection between two figures, I can make a note of it and plug it into my spreadsheet. Easy. Second, I keep a list of figures to investigate, folks like: 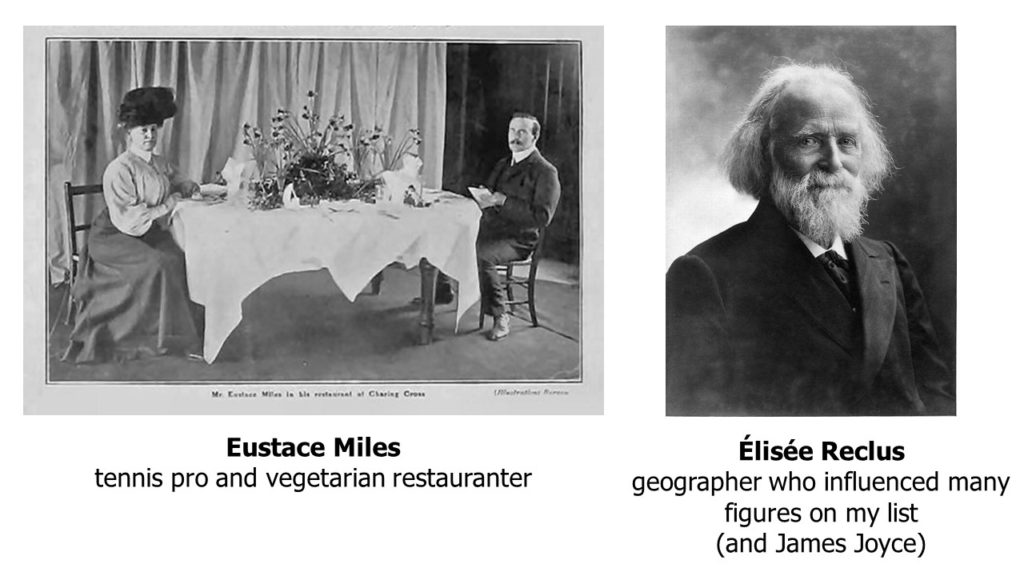 Third, I realized that I should focus some attention on societies and the journals (and other writings) they published. Lots of archives to uncover here — a career’s worth, honestly: 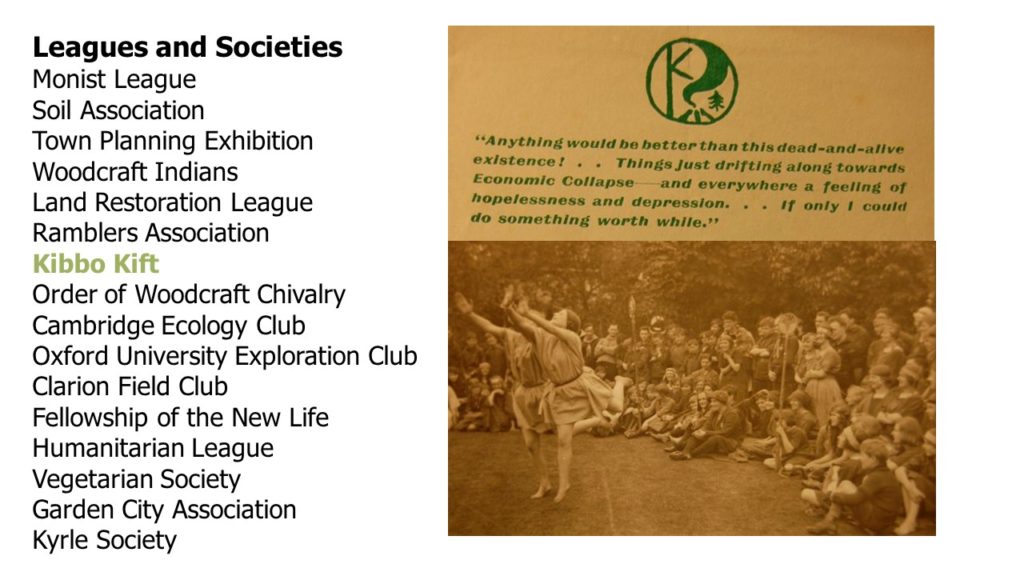 In the future, if I had more time and resources, I’d like to figure out how to make a mass import of names from society lists and/or journal TOCs. And, if I really had the necessary resources, I’d like to make a website that would enable visitors to interact with this network in visually interesting ways and even suggest figures and engagements. Both would be good projects to undertake with some undergrads and/or alongside a dedicated digital scholarship center, etc.

One final point, a thought that’s still percolating. When ecologists began to make their own “network visualizations,” what methods did they use? Ecology, after all, is at root a way of managing information. How does the ecology of the network I’m building relate on a theoretical level to graphs like these? 3